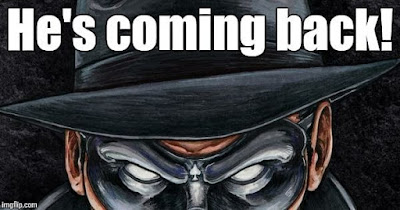 The first comic book I ever wrote and the franchise that started the entertainment giant that would become Source Point Press, is making his triumphant return in the medium that originally inspired him. The Jack of Spades returns in 2018 in his first ever old time radio show!

As a kid my grandfather introduced me to the old time radio shows that he had listened to growing up. The Shadow, The Avenger, Green Hornet, and the Lone Ranger sparked my imagination and would later lead to my love of comic books.

There has been talk about bringing JoS to the airwaves (or in this day and age, iTunes) since the first issue of the comic was released in 2013 at the Motor City Comic Con. 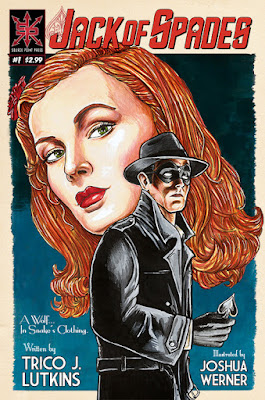 Finally, the noir detective returns to the medium that inspired him. The first episode will be based on the prose story that was featured in Alter Egos Volume I and the Jack of Spades trade paperback, A Wild Card. Original artist, Joshua Werner voices JoS and actress Krissi Kinney plays Allysa Desmond, a rich debutante that hires Jack to investigate the strange goings on at her mansion.

Keep an eye out for the first episode, Lonely Tower Lives, to be released the Summer of 2018 on podcast platforms (Stitcher, Soundcloud, iTunes, etc)
Posted by Trico at 7:49 PM