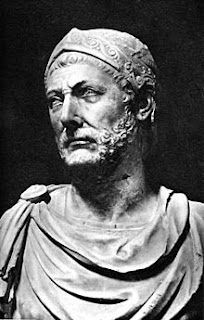 Hello Everyone,
I'm very proud to announce that an article I've written has been published. The article deals with the Second Punic War and how Hannibal Barca used psychological warfare against the Romans.

According to many of the Ancient Historians, Hannibal's forces were half the size of the Roman Army yet Hannibal won most of the battles he participated in and his men suffered less casualties than the Romans. We all know the story of how Hannibal brought elephants over the Alps but his intimidation tactics don't stop there. Throughout his time in Italy, Hannibal wore down the morale of the Romans and exploited the confidence of their generals. My article, Hannibal Barca: The General that Defeated More Than Rome's Army, looks at all the psychological tactics used by Hannibal in the Second Punic War.

I couldn't have asked for a better home than at The Groovy Historian. They're a young and vibrant professional website that brings well researched and writtern history articles to historians of all ages and qualifications. They really live by #IMakeHistorians over there.

Please check out my article as well as all the groovy history pieces available at:

Hello Folks,
Sorry I haven't posted in awhile but some amazing opportunities have came about for me.

#Prof Tric
I have been teaching the Ancient Roman and Greek History course at the University of the People every term since I was hired at the beginning of the year. My experience working at the University and the interactions I've had with students has been amazing! I'm really looking forward to continuing my teaching at UoPeople far into the future.

University of the People

#IMakeHistorians
Secondly, I have been contracted at Study.com to write history lessons for them. I am so grateful for the opportunity to develop history courses for others. This is part of the realization of my teaching philosophy, "I make historians," because I will be creating the content that teaches and inspires future historians.


History Television Programming
Throughout the summer I have been filming and writing a documentary television series for Amazing Productions that features some of the greatest icons from the American West. This series has been a lot of fun. It's given me the ability to again work with Warren Jackson, the outstanding director of UFO: The Otis Files. We finished the last day of filming for this series so during our wrap party/dinner today we discussed working on a children's television show that would teach kids about (what else) history. We will begin filming that later this month through Warren's production company, Muted Madness Films.

History Comics
One of the greatest things to happen recently was that I combined my love for comics with my love of history. As many of you may know, I'm a firm believer in using comics to teach a multitude of subjects especially History so I have written some scripts for American Legend Comics that feature historical figures which should be available for purchase early next year (if not earlier). Also, I was approached about writing a graphic novel set in World War II. I'll keep you informed about this project as it unfolds.


#HistoryHappyHour
I'm proud to announce that I will be presenting a lecture on the History of the Lone Ranger for the Whaley Historic House in Flint, Michigan as part of their History Happy Hour. I have been hoping to become a part of this History lecture series for years so I'm proud to be presenting next month on September 7th at Tenacity Brewing.

More Writing
I have been writing some articles for a website called Indie Volt that features indie comic book creators. This website has been beneficial in spotlighting some great comics from independent creators that would otherwise go unnoticed by the big media outlets. The staff there have been amazing to work with and welcomed me into the fold with open arms.

Another website that I have been asked to write an article for is Groovy Historian. This has long been my favorite history website for years and it is truly an honor to finally be working with them. My article about the Second Punic War should be on the website by the end of the month.
Groovy Historian
Posted by Trico at 8:06 PM No comments: