The film I wrote, UFO: The Otis Files, was shown at the Sunrise 45 Film Festival in Alpena, MI. This was my first film festival and it was a blast! I got to see some amazing independent films and got to do some great networking. Also, it was great hanging out with the film's lead actress, Krissi Kinney and director Warren Jackson. 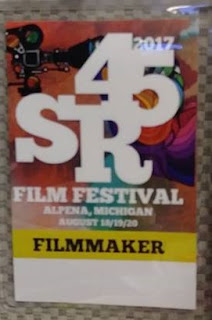 One of the best things about attending the film festival was getting to talk with other filmmakers. Warren, Krissi, our associate Steve, and I were offered to take part in an international indie film project that we'll be filming at the end of September. The Sunrise 45 Film Festival was an amazing experience and I can't wait to be there next year as well.
Posted by Trico at 7:21 PM